Review of Between the Lives by Jessica Shirvington 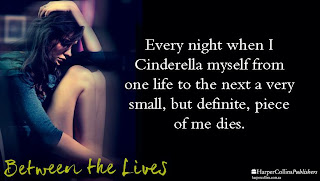 I can't remember the last time i cried while reading. well, last night i did while finishing Between the Lives by the uber talented Jessica Shirvington.

Between the Lives is a YA thriller about a girl named Sabine who has the most unique life imaginable - well two lives to be exact! Her world is split in two, as every 24 hours she has to spend her day in a different life. When one of her lives becomes too unbearable she contemplates suicide, because she knows whatever she does will not be carried through to the other life. She is dead set on doing it, until she meets the mysterious Ethan in her Roxbury life. Ethan teaches Sabine to treasure all lives. the lives she had previously taken for granted.... until Ethan is taken away from her.

This book was so heartwrenching! i cried and screamed at the pages, asking Jessica why she could be so cruel! i had tears streaming down my face until i reached the last chapter. and trust me, it was a good ending.

If you haven't already got your copy on your bookshelf or kindle, i recommend go buy it RIGHT NOW!

You can add it to your Goodreads shelf here