July 02, 2013
I had the amazing opportunity to receive a copy of this book as an ARC in its early drafts, but i can't wait to receive a paperback copy of it when it becomes available. 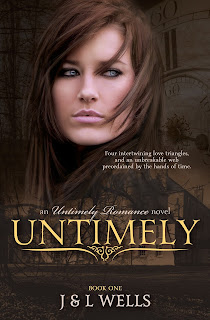 Synopsis:
Heather Richardson is a seventeen-year-old British girl whose life quickly becomes an emotional roller coaster when she meets Ruben Brown, a controlling twenty-four-year-old man who works for her father at Freesdon Manor. As much as Heather wants to love Ruben, the cracks in their relationship begin to show as her eighteenth birthday draws nigh.

In a surprising turn of events Heather is confronted by Frank, an intriguing man from a past that dates back to the nineteenth century. His untimely presence changes everything.

When she’s thrown back in time by an unrelenting force, Heather realizes that her life is not what it appears to be. Her future has already been written, and it seems she cannot escape her fate, a fate determined by a love lost long ago. In her struggle to find herself, Heather must chose her destiny amidst a dangerous love triangle, vengeful lovers, and passions controlled by the hands of time.

i had amazing opportunity to ARC read this book and wow! where do i begin? Heather is a seventeen year old girl who lives in an ancient manor house with her family, moving there when she was 13. Once there she meets an array of colourful characters including Ruben, (who annoyed me immensely!) and Frank.. Oh, Frank, who is very Darcy-esque. Its like he has stepped through time. Heather's family have bought the house and are getting it renovated and restored to its original beauty to re-open to the public as a sort of historical landmark.This house holds many secrets, and when Heather gets to the bottom of it she finds she is deeper involved than she realises.If you love books or movies like the Secret Garden then i definately recommend Untimely.

Now let's find out a little about these two wonderful authors!

Author Bio:
About J & L Wells: J & L Wells is a UK based mother daughter team, consisting of Laura and her mother Judith. Together, they write compelling fiction and are currently working on book 2 of the Untimely Romance series.
You can get in contact with Laura and Judy at the following places:

An Untimely Romance is available now from Amazon and Amazon UK

And now for my interview with Laura and Judy Wells!

1. Have you always wanted to be an author?

Judy- I always wrote poetry, and I guess it just moved on to novels. We got our inspiration on each other, and everything fell into place, and the writing was so natural.

2. How long have you been writing for?

We started our first novel in 2009, had a break, and began our untimely series in September 2012

3. How did the inspiration for your book/s come to you?

Just an idea we built on, and kept adding to.

4. Do you read the same genre that you write?

We read fantasy, paranormal, and romance- and guess we added the element of time travel to our own novel.

5. Typically, how long does it take you to finish a book, from conception to editing?

6. Do people you know inspire your writing?

Author friends are our inspiration (indie community is so great), we have met so many lovely people, and our cover designer Regina Wamba just amazing, and gives us the inspiration to finish the novel- just to see what cover she is going to come up with.

7. Which authors have inspired you?

Jeff Bennington, a great author, a couple of his works being reunion, and the secret tree- not only an amazing author, but long ago became our publisher of An untimely Romance, and a good friend who has helped us immensely.

8. Do you have a favorite author/s?

Jeff Bennington, L.L. Hunter, Jake Bonsignore, S,K Anthony,
Enid Blyton, Jane Austin, are a few we would like to mention.

9. Are there any other books in this series?

An untimely romance is one of three

10. Is your protagonist based on yourself?

No, but similar characteristics to someone we know.

11. What is your goal/wish for your book in the upcoming year?

To finish our next two novels in the series, and hope all our readers enjoy.