The Garden of Eden cover reveal

The long awaited cover for my next release is finally here and its soo worth the wait!

Eden Daylesford is a sixteen- year old Nephilim girl stuck smack bang in the middle of a war between angels and demons. And the bad thing is, she shares both of their blood.
When her mother takes her to the Michaelite Sanctuary in London to try and get rid of the deadly trait that has started to appear - one that hasn’t been seen in a long time. It could stop Eden from forming any sort of relationship with anyone, including the tempting Asher. Eden has no idea just how powerful she is.
Will she learn to embrace her new ability and accept her new role, or go back to her old life of an ordinary human teenager?

Will she be tempted?

The enticing first book in the spin off novella series to The Legend of the Archangel. Set after events in The Chronicles of Fire and Ice. 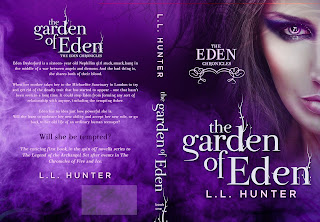 I LOVE LOVE LOVE IT!! Regina Wamba did such a super amazing job with it!!! I love the purple and the green vines on her face. see them? look closely.
The official release date for The Garden of Eden is August 31st and theres a blog tour starting on the 24th august until the 31st.

Now for an excerpt. Here's the prologue for you to read. Enjoy!

I ran so fast I felt one with the wind. I couldn’t get out of there fast enough.  Sooner or later my mother would track me down but until then I’ll enjoy myself. As I entered the arcade I heard my name.
“Yo, Eden.”
“Eden! You escaped.”
I smiled as I saw my friends approach. “Yeah I escaped the clutches of the evil demon.”
“You shouldn’t joke about that stuff, it could be real,” said Zoe innocently. Zoe was my best friend and still an innocent. Her boyfriend Mike thought he understood all. Even though they were Nephilim too, I couldn’t let them learn who my father was.
“It is real, Zo. If there are angels, there are demons. You can’t have one without the other.”
“Who says?” I defended as I retrieve the air hockey puck out of the slot and place it on the table. It begins sliding around in a small circle, waiting for me to hit it.
“Says I.” Mike took the position opposite me and waited. I narrowed my eyes and glared at him. Zoe always says I do this thing with my eyes that could make every boy swoon, but I don’t believe it. How could one person’s eyes make someone swoon? As I wacked the air hockey puck, Mike seemed distracted by something, so the puck sailed straight down into my goal at his end. The electronic voice announced the score to be one nil and that seemed to break his reverie.
“Mike, what happened? You were totally out of it.” Zoe placed a hand on his bicep.
“No, I wasn’t.”
“Yes, you were. You totally let Eden win.”
“It was just a lucky shot,” I said in defence. I couldn’t let them think that somehow I had something to do with Mike’s off-with-the-faeries moment. Did I? It couldn’t be possible. I didn’t just cause Mike to space out and act as if he and I were the only ones left on earth? Did I?
“That never happens, baby.”
“Okay, maybe this turn will be better.” Mike retrieved the puck out of the slot on his side and placed it on the table, ready to hit. I stood ready, but this time I was the distracted one. I couldn’t get the feeling out of my head that I had revealed one of my powers to him. My mother said to never do that. But was it even one of my traits? The air hockey puck sailed straight under me and landed in his goal. One- all.
“Oh yeah!” Mike hooted, but I didn’t feel like partying anymore. I walked away from the table.
“Oh, what’s the matter, Eden, afraid of being beat?”
“No, I just don’t feel like playing anymore.”
“Oh, come on! We were right in the middle of a game!”
I walked away ignoring their pleas as the allure of the hoop game called me over. I had just pushed a token in the slot and picked up a ball, when I heard my name. But it wasn’t from Mike or Zoe.
“So this is where you spend your runaway hours?” I glanced over my shoulder and saw the creep standing behind me.
“Who are you and what do you want?”
“Don’t you see the family resemblance?” he smirked.
I turned to take a good look at him, intrigued. The guy had to be about my mother’s age, maybe a little older and had the same grey- blue eyes my mother has.
“Uncle Adam?”
“In the flesh. Now lets get out of here.”
I chuckled as I turned back around and threw a ball at the highest scoring hoop. It went in. “I am not going anywhere with you.”
Adam clapped. “Good shot. But its not surprising, seeing whose blood you carry in your veins.”
“Do you mean yours and Mum’s, or…”
“Lakyn’s?” He finished for her. “Either way, you have so many abilities you are not even aware of, Eden. And some of them are quite dangerous.”
“How do you know this?”
“I was there from the moment you were born. Trust me, I know.”
I tossed another ball in, this time in a lower scoring hoop and it went in as well. “I’m still not going with you.” As I picked up a third ball and pushed it towards the hoops, it froze mid- air. I gasped and looked back at my uncle. He shrugged.
“Game over.”
As he walked away, the ball remained frozen.
“Wait, how did you do that?” I asked, glancing back and forth from the ball to him.
“If you come with me, I’ll tell you.”
“My mother sent you, didn’t she?”
“She might have.”
“So what you just did, can I do that?”
“Everyone’s traits are different, but probably. If you come with me, you can find out more.”
“I can’t just leave my friends.”
“Yes, you can. You can always make new friends.”
I stopped walking and looked at my friends playing the Daytona. Mike was showing Zoe how to drive, which was really cute. And then I looked at my uncle, waiting patiently outside the mouth of the arcade by a black town car. If I stayed, I would never know what my traits would be, I would never learn how to use them. But I would be a normal teenager, going to school and hanging out at the arcade with her friends. If I went with my uncle, I would no longer be normal. I wanted both lives. But the idea of having amazing powers intrigued me most. In the end I chose door two. Looking back I regretted leaving my friends. But I knew they would never understand. I knew deep down that I was made for a higher purpose.