The Man in Black by Chris Heinicke - Cover Reveal

How freaking cool does this book sound?
This is the next book from new author Chris Heinicke and i personally cannot wait to read it. It sounds like a mix of sci fi and crime mixed with suspense and plenty of action.
Exactly my cup of tea.

I'm very please to be helping Chris reveal the cover for The Man in Black. 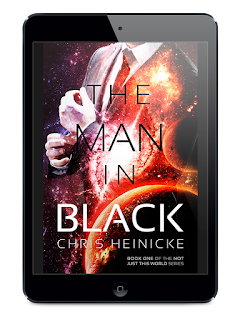 On Jupiter, in 1917, a mining crew is caught in a collapse and only one of them survive. Twenty years later in a parallel world, it is 2001 on Saturn and a pair of detectives are on a stake-out ready to bust a major player in the drug world. When the house they watch explode and an undercover cop is one of those killed, they soon learn of a mysterious man in black behind it.
Events soon unfold which lead Detective McMahon and a traffic cop Josh Cody chasing the man in black in a strange world named Volturnus, the planet we call Earth. Trapped in a strange world in the year 2033, their pursuit leads them into a web of conspiracies and corruption involving gangsters, high ranking police officers and a dangerous player who has everyone wrapped around their finger, including the man in black.
They find help in the form on a young female detective, an analyst as well as a group of mysterious strangers going by names such as The Cowboy, The Driver and The Paramedic. As they dig deeper they soon discover this man in black has been around for a long time, and is willing to do what it takes to finish his own mission : kill everyone. And check out his first book, 5pm. You can download a copy here.

Check back here in August for my review of The Man in Black.