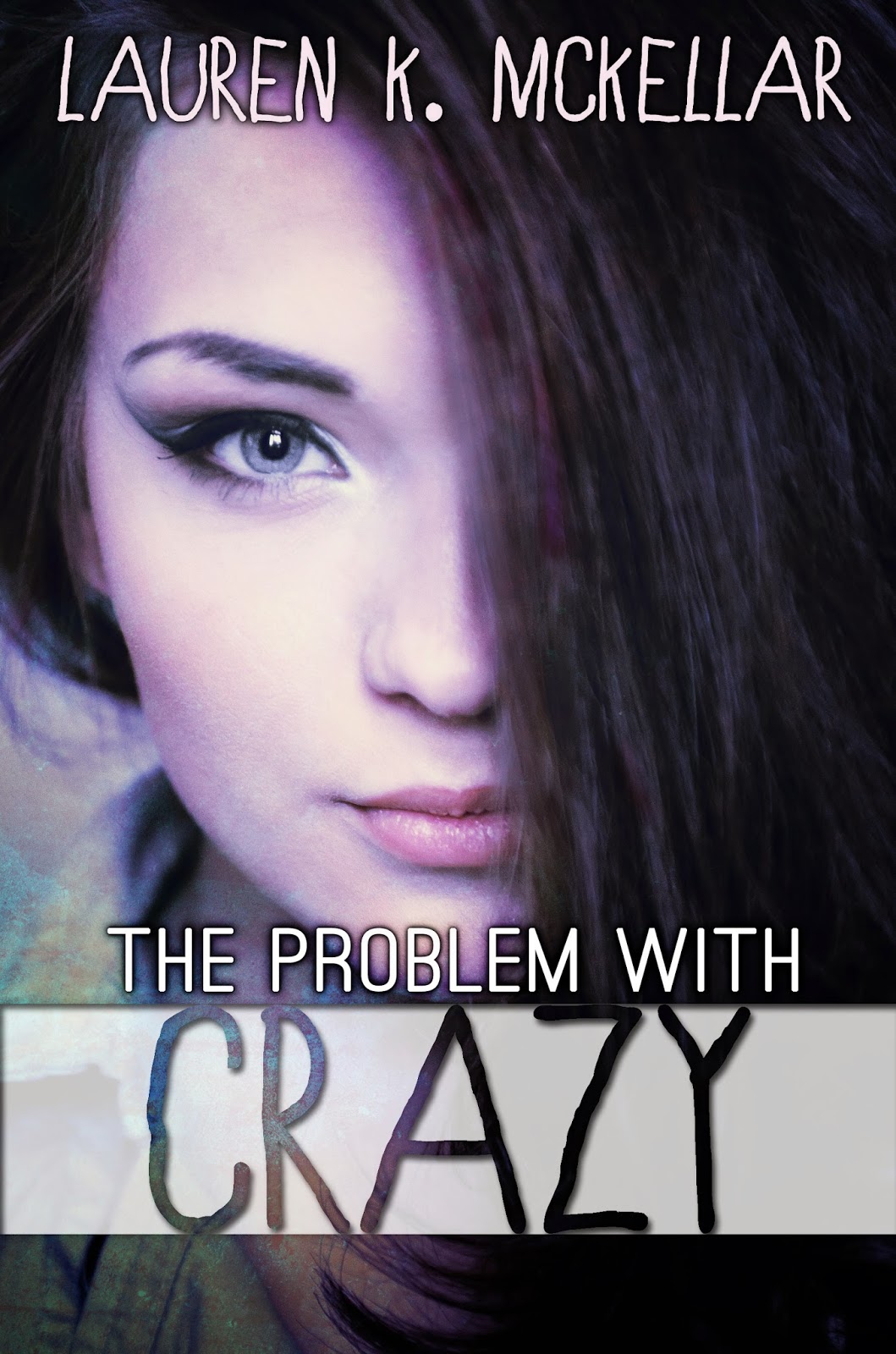 The problem with crazy is that crazy, by itself, has no context. It can be good crazy, bad crazy . . . or crazy crazy—like it was when my ex-boyfriend sung about me on the radio.

Eighteen-year-old Kate couldn’t be more excited about finishing high school and spending the summer on tour with her boyfriend’s band. Her dad showing up drunk at graduation, however, is not exactly kicking things off on the right foot—and that’s before she finds out about his mystery illness, certain to end in death.

A mystery illness she is likely to inherit.

When your whole life goes from adventure and ecstasy to sad and suicidal, what’s the point? Not knowing who to love, and who to trust . . . where does it end?

The Problem With Crazy is a story about love and life; about overcoming obstacles, choosing to trust, and learning how to make the choices that will change your life forever. 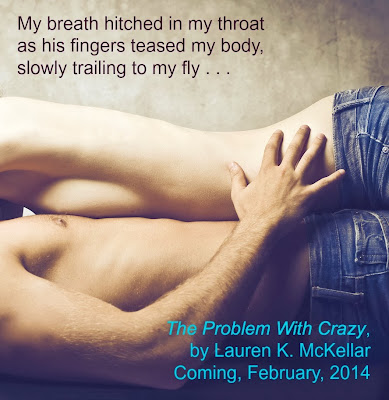 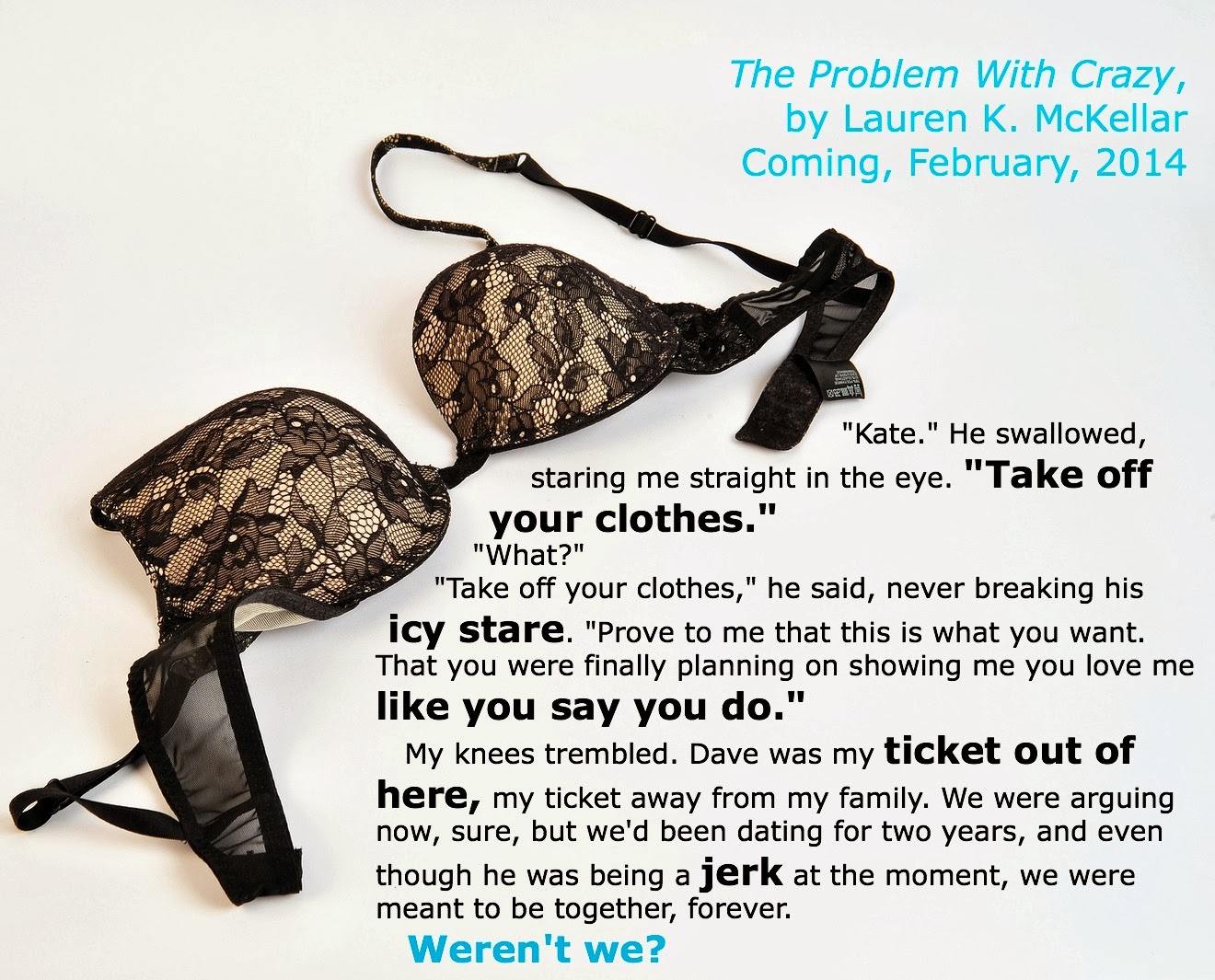 Holy hell. I don't know what to say. I just literally finished The Problem with Crazy and I don't know what to say... I'm speechless. There are only a few books which have made me feel the way this book did. And that is a sign of a freakin good book. Seriously, everyone needs to go buy this once it's out. But I must warn you (the author needs to do this too!) have tissues at the ready when you read this. This book made me cry not once, not twice, but three times! The author just gets emotion. Before I ramble on any longer, I will finish by saying BUY THIS BOOK! It'll be a shame if it doesn't go places. 5 gazillion twinkling stars! 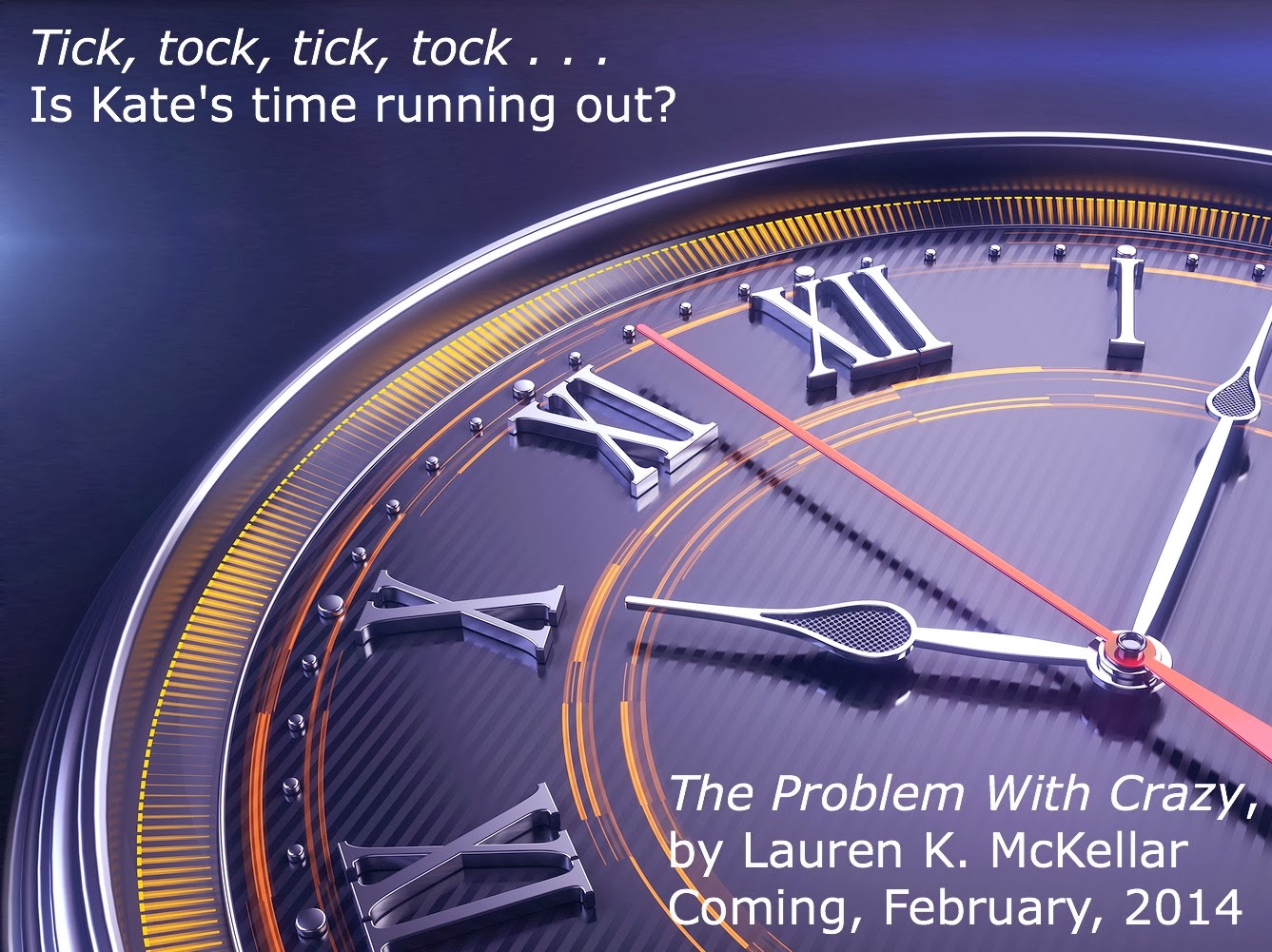 I raised my hands to my sides and lifted up my T-shirt, throwing it over my head and letting it land on the floor next to me. Swaying my hips to the side, I threw my hands out in a ta-da movement, like I was the host on a game show.

“And the jeans.” Dave nodded and took a few steps back to the bed, sitting down and crossing his arms. His face was blank, and his eyebrows were raised. I’d never seen him look so unimpressed.
I flipped the button and undid my fly, slowly pulling my skinny jeans over my thighs, my knees, my calves, and finally my ankles and feet. There was no way to do it and be sexy, so I settled for not falling over. I stepped out of my pants and stood up straight, in only my underwear.
Dave checked his cell for messages.
I felt sick. 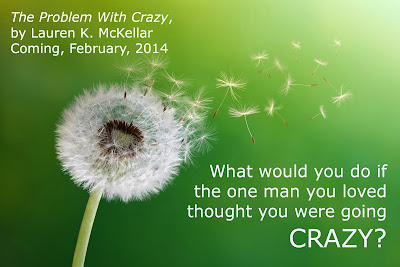 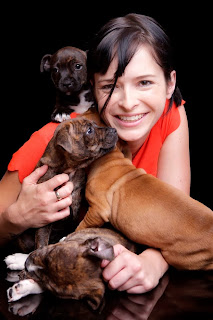 Lauren K. McKellar is a writer and editor of fact and fiction. She has worked in publishing for more than eight years, and recently returned to her first love: writing books that make you feel.

Lauren loves to write for the Young and New Adult markets, and blogs with Aussie Owned and Read, as well as vlogging with the YA Rebels.

In her free time, Lauren enjoys long walks on the beach with her two super-cute dogs and her partner-in-crime/fiancé. 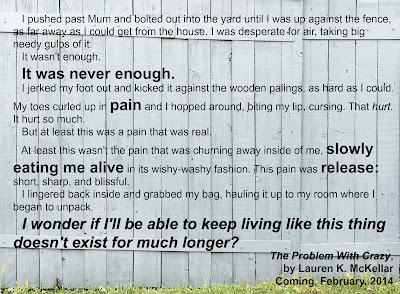 Writing about illness and disease is obviously dancing with danger. After all, when you're talking about a condition that can change, and eventually, strip someone of their life, it's important to treat the topic with sensitivity and do it justice. Stuffing up things like symptoms, treatment and other conditional specifications can not only leave you labeled a liar, but also leave you responsible for potentially causing a sufferer insult and/or injury.
The Problem With Crazy deals with Huntington's disease, a neurodegenerative disorder that results in a loss of brain function and, approximately 15-20 years after onset, death. And that's putting it in simple terms.
When writing about this disease, I wanted to keep as close to the facts as I could. Being a lesser-known condition than, say, cancer, or Parkinson's, it was difficult at first to gather facts.
Eventually, I approached a few organisations, state bodies for sufferers of this illness, to fact check and gather information. This was difficult as a writer; asking people to give up their time for something that may never be published is hard, especially when you're asking such personal questions. Still, I was lucky enough to speak with a person at the Huntington's foundation in Victoria, and they helped me a lot.
I also learnt a lot from talking with sufferers and relatives of sufferers. They showed me a unique angle to the disease I hadn't at that point considered: a compassion, and positive focus I may not have been aware of otherwise.
In the end, I asked another state body to read through the book for any factual errors. At the end of the day, this illness isn't my story to tell--it's theirs, and I don't want to misrepresent it. Still, I do expect there to be an element or two of information that perhaps isn't quite accurate. When it comes down to it, I haven't suffered from this illness, nor has anyone in my family, thank goodness. It is for this reason that I hope you, as a reader, understand that this is a work of fiction, and for more information on this disease