September 12, 2014
September is a very special month for a variety of reasons.
Not only does it mark the 1st birthday's of 2 of my books (The Garden of Eden and Treacherous), but it  is also the month of Suicide Awareness. Today in Australia it is R U OK Day, so i thought i'd post something very special.

When i first published Treacherous i had no idea the reaction it would get. I sold a few hundred copies on release day. I thought wow, writing a steamy adult novel was a good idea. Then the nasty reviews starting floating in. No, they gushed in. You get the good with the bad, right?

That's not the reason I wrote and published Treacherous. No, the real reason was that i wanted to raise awareness to bullying, depression and self harm. I wanted to write a story that not only reflected me in some ways, but i needed an outlet to write those painful memories. Before you freak out, i didn't harm myself, but i did have depression and i was bullied.

To those who haven't read Treacherous, the book follows 21 year old Charli on her journey from jaded teenager who never fit in because of who her father was, to troubled young woman who falls in with the wrong crowd. Charli she has a dark secret. Like me, Charli was silently bullied and talked about behind her back. To me, that is the worst kind of bullying. You get worn down until there is nothing but raw wounds. Charli tried to hide her self harming behaviour, especially when she went to college. She participated in risky behaviour all to gain the attention of parents she felt didn't care. Then she meets Nathan and has her happy ever after amen. I haven't found my Nathan yet, but i'm always looking out for him.

To celebrate Treacherous' birthday and Suicide Awareness month, i have a very special surprise for you.

Not only is TREACHEROUS going to be on sale for the rest of September, but below is an exclusive excerpt from what would have been the sequel to TREACHEROUS. (working title TORTUROUS.) Unfortunately the book didn't gain enough interest for a sequel to happen, but here it is. Enjoy:


Relentless – A Treacherous Extra
**Unedited. All editing mistakes are entirely mine**

It's not often I refused my father’s car or driver, but today I just wasn't in the mood to face Henry our chauffer and his machine gun, or questions that sounded eerily similar to what my father might say. So I walked. I could've caught the bus, but I don't want to face the relentless teasing, laughing and whispers I knew were about me. I also could have driven my own car, but on this particular day Henry had chosen to take my Mini Cooper in for a service. Yeah, just my luck.
The walk from school to my house was a good few hours and I knew it was silly, but I had to clear my head and hoped the cool air would dry the tears that were still staining my face from earlier. I readjusted my bag strap, wiped my eyes and trudged on.
I heard the engine before I heard the voice. Someone with a hotted up vintage car slowed down and cruised along beside me. I didn't look up. It was most probably a jerk from Kings.
"Hey Jayne," the idiot yelled out making me look up. It was a mistake. His hand shot out the window and something came spinning towards my face. The squishy, half rotten orange hit my face, splattering orange flesh and juice everywhere. The sticky juice mingled with fresh tears, stinging my eyes. "You're such a slut." The two jerks in the guy sniggered and sped off, leaving me standing on the side of the road helpless. I angrily pulled out my phone and called Henry.
***
I sat up straight gasping for air.
"Charli? What's wrong?" Nathan asked, sitting up behind me. He kissed the back of my neck but I shrugged him away and slid out of bed.
"Nothing. I had a bad dream, that's all. I'm going to check on Hayley."
"Do you want to talk about it?" He asked as I left our room to go into our daughter's.
"I'm fine, Nath." I leaned over Hayley's cot and smiled when I saw her chubby cheeks, white blonde ringlets and smiling face staring up at me. "Hey baby, how's my big girl doing?" I lifted her out of the cot and held her close to me. I heard movement behind me. I turned and saw Nathan leaning against the doorframe watching us.
"I just don't want anything like that to happen to Hayley, you know," I told him, kissing Hayley's forehead.
"You don't want what to happen?"
"I don't want her to get teased when she starts school."
Nathan moved to stand beside us and kissed his daughter's head before kissing mine. "She won't get teased, but if she does, unfortunately it's a normal thing. Anyway, she won't go through what you did. She has a totally different life."
I looked up into my husband's kind and handsome face and knew that right there was the reason I fell in love with him a year earlier.
"You're right." I smiled at him and kissed our daughter once more. "Let's go make breakfast."
"Lead the way."
As we headed out to the kitchen, I knew it couldn't get any better than this, but I couldn't push the feeling I had aside that this morning’s dream was only the beginning.

You can purchase Treacherous from all online bookstores. (Prices may take a while to change)
Amazon / iBooks / B&N / Kobo / Smashwords 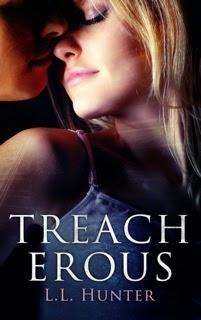