The Chronicles of Light and Dark Cover Reveal

November 15, 2015
I'm beyond excited to share this cover with you. It is my favourite yet.

There is a bit of a story behind this and i've been dreaming of it since the idea for the Legend of the Archangel came to me.

The book itself is mostly about Lakyn and his journey thus far. It was very emotional to write and i really hope you don't hate me after you read it. i promise the events in the book happen for a reason and i do have big plans for certain characters in the last book.

I wanted to have Lakyn on the cover first and foremost. But the trouble was finding a model or stock photo that embodied him - nothing truly captured the essense of my Lakyn… until i met Daniel.

I met Daniel Ford through my cover designer, Regina Wamba. He is a musician, model and all round nice guy. He is also hilariously funny. Make sure you check out his Facebook page (and watch his short films. Did i also mention he's a ridiculously talented film producer?) and give it a like and say hi. Say i sent you.
Daniel had the 'look' i was after, handsome yet rugged. The best part was, he was thrilled to be a part of this project!

So without further ado, i give you the cover for The Chronicles of Light and Dark. 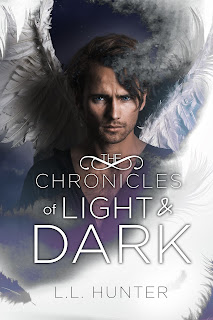 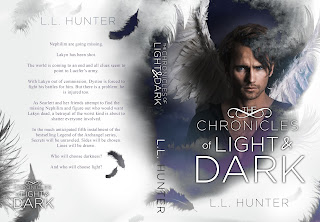 What do you think???

I think the cover perfectly captures the story and the feeling i was after. All i wanted was the black and white feathers, and Lakyn's Trait shown (the ability to heal shown physically with purple/blue light.)  I didn't even give Regina many details. She is just THAT good.

The Chronicles of Light and Dark will be available November 30th.

You can pre-order your copy now: