Today on the blog, i have the pleasure of featuring one of the women whom i met at the beginning of my author career. I have read all her books and we connected through our mutual love of angels and angel fiction.

I love her writing, and hope you will too. I urge you to pick up one of her books and try it.

I lied. I actually haven't read her latest, Beyond Spells, as it just came out, but it is next on my list! 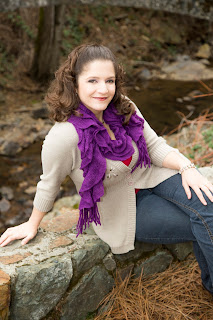 Harmony Lawson was born on a naval base in San Diego, California. Currently, she and her family live in Northern California in the foothills of the Sierra Nevada Mountains. She is mostly self-taught in drawing, painting, and writing. When she read her first romance novel at age 16, she became a hopeless romantic and when she started working for a book distribution warehouse in Oregon at age 19, she knew she wanted to write.
Harmony is fascinated by angels, and she incorporates research in angels, the Nephilim, and fallen angels into her fictional stories. Many of the descriptions in her books reflect actual documentation found in various documents on angels.


While she has endured many hardships in life, she believes life will be better tomorrow as she always learns something new from her experiences. Life has its ups and downs, trials and tribulations, and Heaven and Hell. She believes the bad times are a test to prove a person’s worth. Her books reflect on that concept. Writing also helps her heal from past traumas. In the meantime, she cares for her family, loves her pugs, and remains silly through all that life throws at her. Her goal is to be an introverted hobbit. 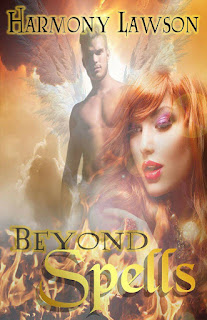 On the eve of Mercedes Weaver’s 16th birthday, she inherits an ancient book of spells and told it was written by angels. What she doesn’t listen to is the advice given about the consequences of using the spells in the book. After Mercedes invokes an angel named William, the unimaginable happens and she fall in love with him. The closer Mercedes and William become, the deeper the situation escalates and everyone she’s ever loved will be put in danger.


It all comes down to an inconceivable choice. If she hadn’t risked everything, she wouldn’t have met William and their love wouldn’t have gone Beyond Spells. 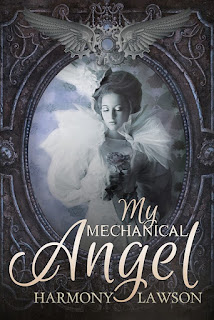 The small Wild West farming community of Whitcomb was afraid of Seraphton, the shining metropolis that lies along the horizon. Reverend Archibald preached that the city was forbidden, an abomination to the world, and evil demons lurk inside despite the celestial name. Emmaline had a feeling there was more to Seraphton than the Reverend let on. Emmaline Fortenbury had always felt out of place in Whitcomb and wondered if Seraphton was really like he said. He preached like he held a grudge. What were the secrets of Seraphton and how did it connect with Reverend Archibald?
Then a stranger comes to town and the meeting changes her life. Aleksander Galloway was feared by the townspeople, but she found him fascinating. She wanted more out of life for herself. She wanted the chance to explore the world, and he seemed to be the man to help her. He had silver metal wings and a mechanical eye. He was handsome in a way that was not like the townspeople of Whitcomb. He was sophisticated, educated, and very interesting. How can their love grow when their two towns collide? Can their love bring everyone together for peace? 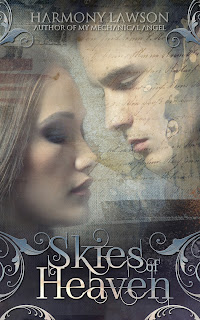 Ariella's life had been perfect until she saw her family disappear before her eyes. Now she has found herself to be the only survivor on the planet. Everyone vanished without a trace. Just as she is about to do something drastic, she is confronted by a man claiming she is an angel with amnesia and he has been looking for her for over seventeen years. He also says that she was placed in an alternate world where she believed herself to be the only survivor. Now Rumen and Ariella have to find Raziel, the angel who holds the secrets of the universe, who knows where the book of secrets is so they can use it to protect a special group of human survivors from being destroyed by demons. Can their budding relationship endure the trials they must face as Ariella tries to remember who she is and to protect the remaining survivors of the human race? Maybe they will find love in The Skies of Heaven?