December 15, 2017
The day is finally here where i can share the gorgeous cover for my new series!
Angel of Hope is the first book in a trilogy set in the same universe as my Legend of the Archangel and The Eden Chronicles, so you'll recognise most of the characters. In the Angels of London series, I'll also introduce you to a set of new ones, Gabe (whom you briefly met in The Chronicles of Heart and Soul), is Adam's son and Eden's cousin. Melody is a mysterious new character, whom you also briefly met in The Chronicles of Heart and Soul. I had fun exploring her past and her weaknesses and strengths. I'll delve more into her past in book 2 of the series.

But for now, i hope you enjoy the cover for Book 1, Angel of Hope.

Scroll down to read the blurb and pre-order your copy for the limited time price of 99 cents!

Gabriel Daylesford thought he had escaped a fate worse than death after the battle with Lucifer and his demons.
He knew one day Samson would seek revenge for killing his father.
But until then, Gabe has to navigate the halls of Michael Academy and learn what it means to be Nephilim.
At least he has Eden and Asher for company.
When he starts receiving frightening visions, and a warning from his human grandmother to stop using his trait, he realises he is in more danger than he thought.
He has to decide who to trust if he wants to save the world from being overrun by demons once more.
And with the sudden appearance of two mysterious girls added to mix,
Gabriel knows this won’t be easy.
He always knew he was fated for something much bigger than himself. He just doesn’t know what that is yet.

Angel of Hope is the exciting first book in an all new spin off series set in the same universe as The Legend of the Archangel series and The Eden Chronicles. 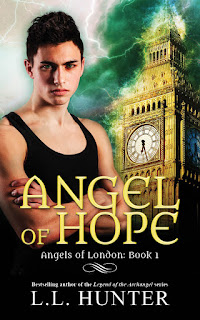 To celebrate the cover reveal and upcoming release of Angel of Hope and Christmas, I've put my entire Nephilim universe ON SALE! You can now get the entire Legend of the Archangel series and The Eden Chronicles for just 99 cents each!