Man Amongst the Stars - Cover Reveal

August 03, 2018
Here it is! The moment you've been waiting for. Here's the gorgeous cover for part two of the Written in the Stars duet, Man Amongst the Stars!

Title: Man Amongst the Stars

Designed by Kim at KILA Designs

Add it to your Goodreads shelf


Jack Dean has always wanted to make movies.
But there is more to the man than just good looks.
Hounded by media and followed by rumours, he feels trapped in Hollywood.
With his previous film bombing at the box office, and his new film looking to go the same way, he uses the opportunity of a press tour to Sydney Australia as a means to escape.
After an encounter with the intriguing writer Chloe Vanderbilt at the premiere of his latest film leaves Jack rethinking everything, he knows his life is about to change.
When a picture of them goes viral, and their secret moments revealed to the world, Jack takes the leap and goes with it.
The risks are great, but it’s a chance he’s willing to take.
You see, there’s one thing missing from Jack’s life.
Something money can’t buy.
Real Love.


And to find it, he’s willing to lose everything. 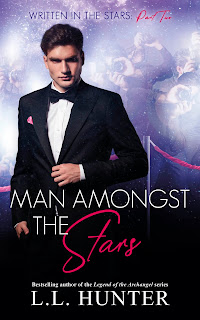 Kobo
Nook
iBooks
(Amazon links coming on release day. Sign up here to get an alert when the book is released)

To purchase book 1, Woman in the Photograph, click here.